A video has showed a school principal dancing energetically and sweetly on assembly ground.

The school principal danced right before the students who shouted and cheered him up in uncontrollable excitement.

The man was dressed in a blue shirt tucked into a black trouser and a black shoe to match. He was standing on a podium at the assembly ground.

He suddenly picked up dancing and started making his moves. He raised his right leg and then the left one and then moved successively from one end to the other.

His dance steps were so funny that everyone at the assembly ground started shouting and cheering him up.

The school staff who were on the platform with him were amazed by his dance moves. The student were so excited that some of them also shook their bodies.

The reason for the celebration is not yet know, but the school principal seemed happy over something.

Watch the video below:

Social media users took to comment section to express their thoughts. Some reactions are shown below:

Analyst said, “staffs seems to be motivated… such moral need some backup”.

maiboyz@muloverpeople said, “Passion with his work”.

Pastor Mmako said, “what is the name of the School?” 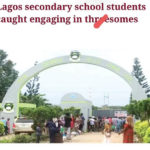 January 5, 2023
Don’t treat us like slaves – ASUU again hits out at FG over half salary