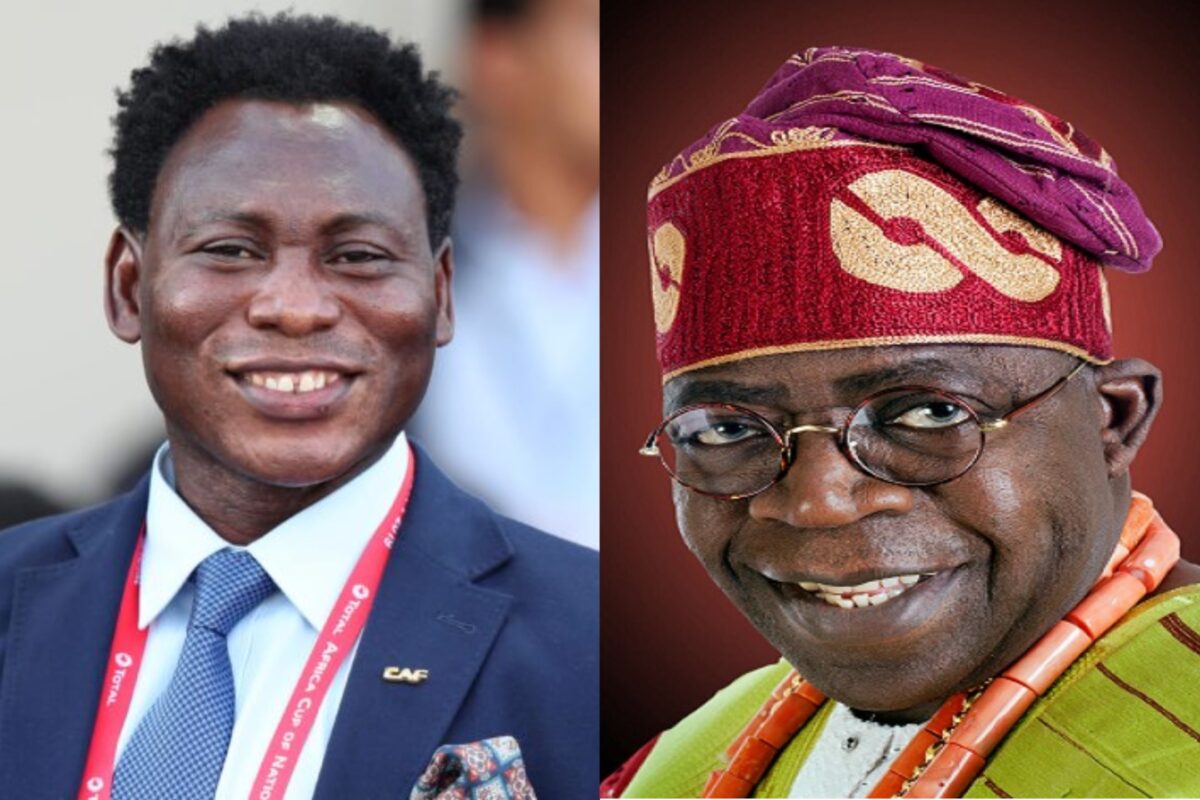 Nigerian ex-international, Daniel Amokachi has staired reactions fifty-two days to the general election after he endorsed the presidential candidate of the All Progressives Congress (APC), Bola Ahmed Tinubu.

In a video on social media, the footballer showed off his Rolls Royce with APC Presidential posters. The video has caused an uproar among netizens on social media. While many slammed the football legend for his choice, others noted that a celebrity doesn’t have to support everyone’s favourite.

One Bukas Tony wrote: His choice… you have urs to make too.

One Agbujare wrote: Naija una go cry tire so if any celebrity endorse someone that’s not your favorite it’s hunger 😂😂😂 but if it’s your favorite na all joy God bless you God yen yen … Una go cry, it’s call DEMOCRACY everyone got a choice so no vex for any celebrity abeg .. Na their choice thank u …

One Ms. Lambart wrote: The truth is, weather tinubu or obi wins, this guy’s endorsing them( tinubu guy) will not suffer, na you and me so abeg vote wisely

One Angel Uriel wrote: Daniel doesn’t have problem and I’m sure he’s family ain’t in Nigeria so he can do anyhow , but God will make the best man win.

One Bosh Bay wrote: Na the money he go chop for the next 4years if no be tinubu who remember am.

One Monasega wrote: All of dem just dey find der own personal interest.

One Bright Tobi wrote: Hope he won’t remove it if Tinubu doesn’t win?

One Gerald Pino wrote: Sha keep the money for later I no wan read for any blog say they left you in poverty.

Netizens mock Tinubu after he mistakenly prayed for PDP

Kemi Filani recalls that Netizens mocked Tinubu after he mistakenly prayed for the opposition party, the People’s Democratic Party (PDP) instead of his own party, APC during a presidential rally flag-off in Jos. KFN notes that Tinubu has been making errors in his speech at previous presidential rallies.

Frank wrote: Such a disappointment

@Closefigure: Toh’! See the state of the nation at this critical time, n see the man chosen by gluttons to lead over 300 million people!

@misswande: Na so buhari tell us “from top to bottom”. We no take note, he Dey show us pepper now. These people are old, they should go and rest

@tee4tayo1: At this rate, tinubu might just put his thumb under labour party on the day of election God bless Labour Party oh!!!!

Taking to his Twitter page, Mr Macaroni noted that he has always said everyone is free to support and vote for any candidate of their choice; however everyone should vote wisely. He asked why voting wisely triggers anger in some people.

Mr Macaroni’s tweet comes after he was confronted by a supporter of Tinubu identified as ‘APC violence queen’ for supporting Peter Obi, the presidential candidate of the people’s Democratic Party (PDP).

The supported twitter: Yoruba Bastard is who you are… Continue hailing the Igbo… They will still hate you… Only a fool point to his father house with left hand….. You are disgrace to yoruba people…. Your mother should disown you… Ode.