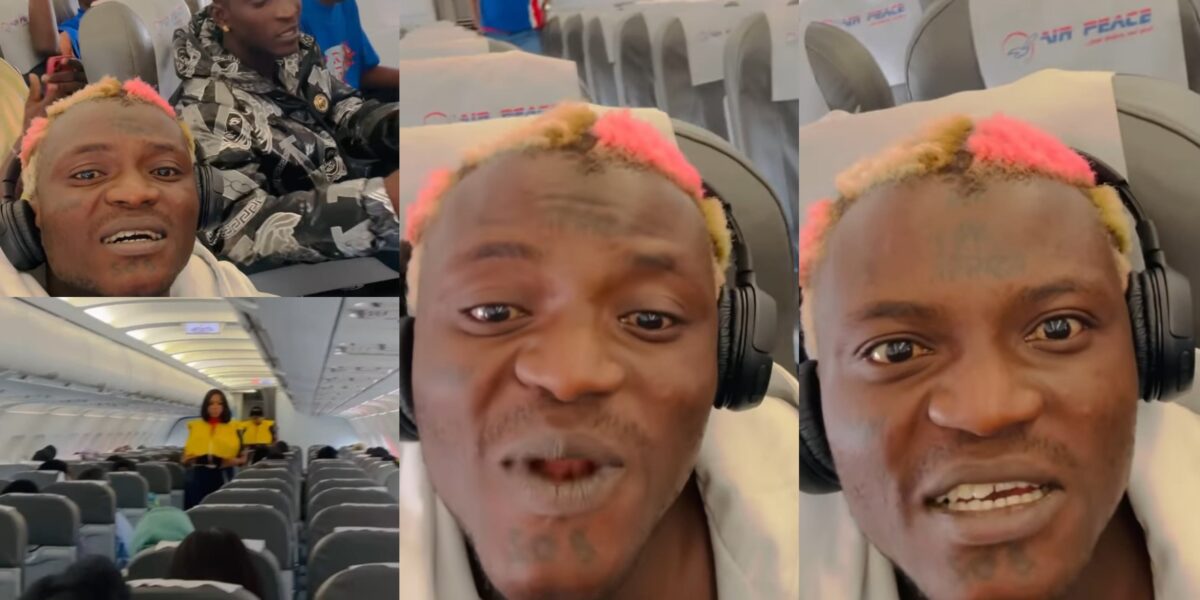 Nigerian controversial singer, Habeeb Okikiola better known as Portable has shared his experience while traveling from Lagos to Benin.

The controversial singer revealed that he had boarded a flight on popular airline, AirPeace, but met the shock of his life when he discovered that they were only few persons on board.

Sharing video, Portable and his crew members were the only ones on the flight as the plane was filled with empty seats.

This isn’t surprising as AirPeace, have been in the news for their poor services.

Slamming the airline, the reality star accused the airbus of taking off despite a technical issue that later made them to turn back to Lagos after flying for almost an hour.

According to Alex, who accused the airline of joking with passengers’ lives, people almost fainted following the turbulence report and to top it up the landing was mentally stressful as it felt like the tires weren’t responding because they kept going up and down, turning round.
She went on to call on the airline to fix their issues.

“I do understand that most times, when things happen, I’m adviced to keep shut and be careful because calling out a brand might be a bad signal to others that were or will consider working with you but NO, not today. If nobody is going to say anything, without fear, I will.
.
I’ve been cracking jokes about the numerous unfortunate events I’ve had with @flyairpeace in recent days but this is the height of it.
.
How can you tell me that an aircraft took off and a technical issue was detected mid air causing us to turn back to Lagos after flying for almost an hour because there are no technicians at our destination to fix it?… Read more here”.

Portable arrives stage in a coffin

In other news, Portable had gotten the internet talking with his dramatic entrance to his concert in a coffin.

The singer, on Wednesday night, December 28th held his Portable Live in Concert at African Shrine.

The highlight of the night was when the father of four arrived stage in a coffin. In the video, Portable could be seen entering a coffin as he was been transported to the stage .

The singer seems to be a lover of coffin as weeks back, he stirred the internet when he tattooed a coffin on his face.

The Zazuu star while in was in Cyprus for his concert decided to get a different look as he opted for some new works of art on his face.

In a video shared via his Instagram page, Portable could be seen sitting on a chair while a White man gave him his desired drawings. One of the tattooes appears to be a casket on one side of his face and the inscription Ika of Africa on his forehead.

These come as additions to the already existing tattoos all over the crooner’s body.