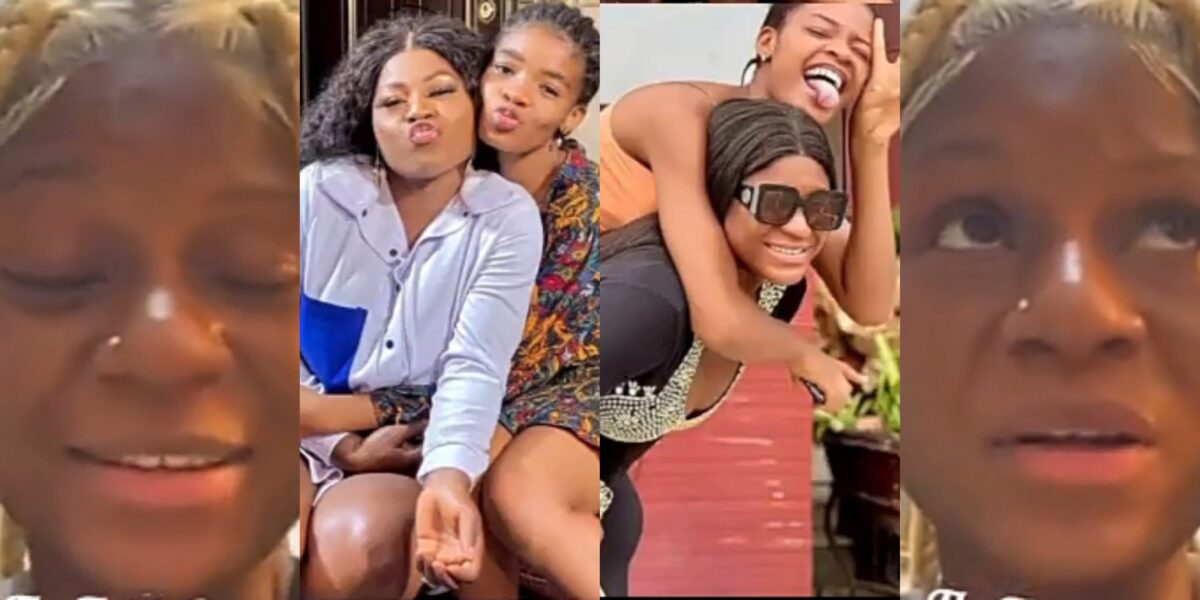 The mother-daughter relationship between actress, Destiny Etiko and Chinenye Eucharia has come to an abrupt end.

The actress, in a video making rounds on the internet, confirmed that she has cut ties with Chinenye.

According to her, Chinenye has been ungrateful and disrespectful to her. She noted how she picked her up, trained her and spoiled her, yet received was been disrespected.

Though, not speaking much about the situation, Destiny Etiko, stated that Chinenye hurt her badly. Despite her wrongdoings, Destiny affirmed that she still loves her and wishes her the best.

Sorry I can’t say. I tried to keep it cause I love her. I love Chinenye so much. I saw a girl coming from a ‘rich’ background and that I wanted to help. I meant well for her.

I don’t want to give people story to talk about”.

This came after Destiny Etiko showed off her new adopted daughter.

The actress threw shade to Chinenye as she vowed to never stop being nice. Comparing her new adopted daughter to Chinenye, she stated that her new daughter is still very small and as such wouldn’t possess Chinenye’s bad behavior.

“My baby is growing so fast.

Won’t stop been nice. At least this one is still very small and I know she won’t be too wile, rude, disrespectful, ungrateful and a backbiter. It’s well sha”.

Recall that Destiny Etiko met Chinenye Eucharia last year, during one of her visits to her locality, where the latter unashamedly displayed love for her.

The actress launched a search for Eucharia, who Destiny Etiko’s bodyguard angrily shoved off.

A video shared on her Instagram page showed a little girl expressing how much she loved the actress and follows her on all social media platforms.

According to Destiny Etiko, the kind of love she received from the crowd melted her heart and made her cry after their car drove off.

Destiny Etiko said she was overwhelmed and prayed for her fans, especially the little girl expressing love for her.

She added that she is looking forward to meeting the little girl and requested her contact.

She wrote: The kind of LOVE I got from the crowd today is still melting my heart I literally cried wen our car drove off…..it was overwhelming. GOD BLESS MY FANS ALL OVER THE WORLD AND GOD BLESS THIS LITTLE G”.